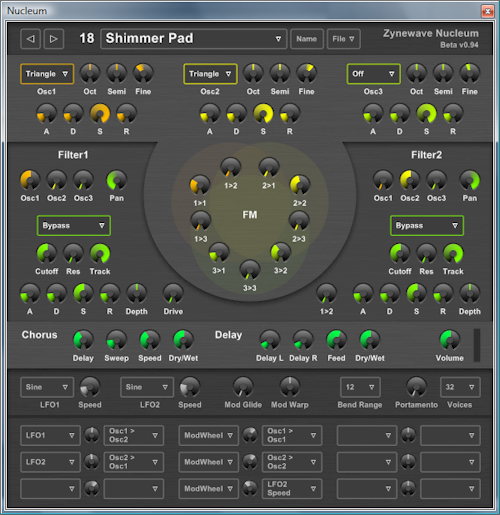 Nucleum is a VST instrument plugin that can be used in VST host applications on the Windows platform. Nucleum is developed by Zynewave and is released as freeware. Please visit zynewave.com to check for software updates.

Preset management controls are located at the top of the editor window. Nucleum contains a bank of 128 programs. Each program stores a snapshot of all the parameters in the editor. You can select a program using the two arrow buttons or the program popup menu. You can also change programs using MIDI program change messages. Press the Name button to rename the current program.

With the File menu you can load and save the current program or the entire bank. Nucleum preset files are saved as .txt files. Note that this is a different format than the .fxp or .fxb files you can save from your VST host application.

The parameters can also be edited with MIDI Control Change (CC) messages. At the end of this guide is a chart showing the CC numbers that are assigned to each parameter. Nucleum has three oscillators. For each oscillator you can select the waveform type and the tuning in octaves, semitones and fine resolution. The available waveform settings are: Off, Sine, Saw, Triangle, Square and Noise. FM synthesis traditionally uses sine waveforms but Nucleum allows you to use any of the waveforms with FM.

The output of the three oscillators can be mixed into two filter effects. The level of each oscillator output is set with the Osc1, Osc2 and Osc3 dials at the top. If you use an oscillator purely as a modulator in an FM sound, you can set the output of the oscillator to zero to avoid that it gets mixed in with the sound.

The Cutoff dial controls the cutoff frequency of the filter processing.

The Resonance dial sets the amount of boost that is applied at the cutoff frequency.

Each filter has an envelope that modulates the filter cutoff. The filter envelope is defined by the same type of parameters that define the amplitude envelope. In addition to the ADSR controls there is a Depth dial that sets the amount of modulation applied to the cutoff. When the depth is set to zero the envelope has no effect. Increasing the depth increases the range that the cutoff is modulated. Setting a negative depth value inverts the envelope causing the cutoff to modulate towards lower frequencies.

In addition to modulating the filter cutoff, the filter envelopes can also be used as modulator sources in the modulation matrix, which is explained later in this guide. This is most useful if the filter is bypassed.

The oscillators and filters all process mono signals. The two Pan dials control the panning of the filter outputs as they are mixed into the master stereo chain. Note that if you have set the Fil1 > Fil2 dial to maximum, the Filter1 Pan dial has no effect since the entire Filter1 output is routed into Filter2.

The master stereo chain contains optional chorus and delay effects. The final Volume dial controls the master output level of the plugin. The level meter placed next to the volume dial flashes red when the output level is overloaded. This overload can produce a harsh sound, so you should keep an eye on the level meter and reduce the volume if you notice any overload.

The chorus effect mixes the original signal with a delayed signal where the delay time is modulated by a sine LFO. The Delay dial sets the minimum delay time. The Sweep dial sets the range of time that is added by the modulating sine wave. The Speed dial sets the frequency of the sine LFO.

Note that since the chorus effect is a master effect that is running continuously, the sound of a playing note may vary depending on where the chorus modulation is when the note is started. Thus the chorus effect may not be suitable for some types of percussive sounds.

The delay effect is a stereo ping-pong delay. The left and right channels of the stereo signal are delayed separately, and the feedback of each channel delay is sent to the opposite channel.

The Delay dials are split into two ranges. The first half sets the delay time from 0 to 1 second. The second half selects between note divisions that are synced to the current tempo of the VST host application. The choices range from 1/64 to 1/1, with triplet and dotted options.

The bottom of the Nucleum editor contains modulation settings. There are controls for various modulators and voice settings and a modulation matrix where you connect modulators to modulatable parameters.

Nucleum has two Low Frequency Oscillators (LFO). They resemble the normal oscillators in their waveform options, but instead of generating audible sound they oscillate at a much lower frequency and their output is used to modulate other parameters.

The Speed dial is split into two ranges. The first half sets the speed from 0 to 20 Hertz. The second half selects between note divisions that are synced to the current tempo of the VST host application. The choices range from 1/64 to 4/1, with triplet and dotted options.

The Bend Range option sets how many semitones the pitch bend wheel on keyboard controllers will bend the pitch of the oscillators.

The Portamento dial sets the time it takes for the pitch to glide from the previously held note to the new note played. Portamento is mainly intended for monophonic presets since portamento behaviour can be difficult to control with polyphonic voices. Setting the dial to zero disables portamento.

The Voices option sets the maximum number of simultaneously playing voices. Monophonic voice (1 voice) can be set to either Mono Hold or Mono Retrig. The hold option allows for legato play, as it will skip the attack/decay stage of the envelopes if a new note is played before the previous note is released. If the maximum number of simultaneously playing voices has been reached, Nucleum will steal the voice of the oldest playing note when it starts playing a new note.

The modulation matrix is where you connect modulator sources to modulatable target parameters. There are nine available source/target slots each with a Depth dial that controls the amount of modulation.

For example: Route an LFO into Bus1 Send. Route a filter envelope into Bus1 Multiplier. Route Bus1 output to a target parameter. The resultant modulation is an LFO output shaped by the filter envelope.

The Nucleum CPU usage can be reduced by making sure that unused effects are turned off. You can also consider turning off effects if they only have a minimal impact on the sound.

The following is a list of settings that can help reduce CPU usage:

Another note about the Nucleum CPU usage: The plugin processing uses SSE instructions to speed up the processing of multiple voices. SSE instructions can process 4 voices simultaneously so you may notice that CPU usage only increases for every fourth note added to the currently playing voices.

This chart shows the MIDI control change numbers that are assigned to each parameter: 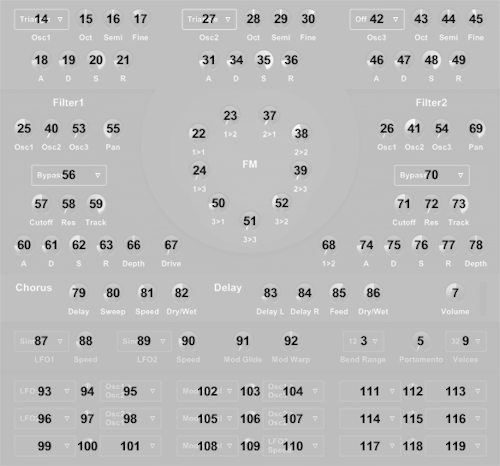